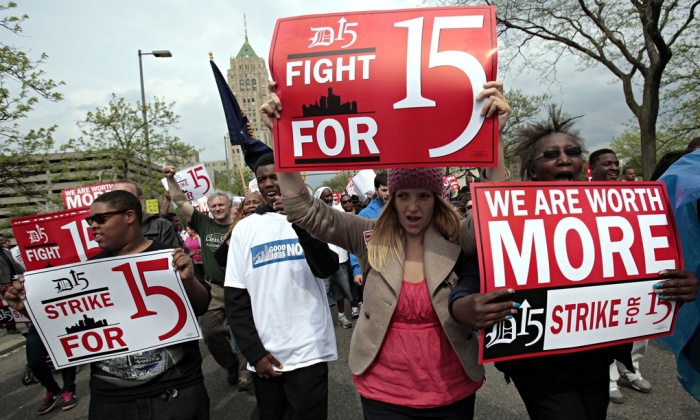 NZ workers to join US fast food workers (above) in taking action on April 15.

Fast food workers in New Zealand will be joining an international day of action on April 15 to support an end to the super-exploitation of these vulnerable workers. In the US the cry is $15 and a union. In New Zealand we are demanding “End Zero Hour Contracts Now”.

Negotiations between Unite and all the fast food companies have reached a critical stage. The fight for a better deal has begun at Wendy's with action at a number of stores across the country. Votes to authorise strike action are being held at McDonald's and Burger King. Negotiations are continuing more productively with Restaurant Brands (KFC, Pizza Hut, Carl's Jr and Starbucks).

Unite was told by workers that 2015 was the year to end zero-hour contracts. That message was relayed to the companies at the end of negotiations two years ago. We talked about it in blog after blog. We had meetings with the companies over the past two years to remind them to be ready. We met with them again at the end of 2015 and held a fast food workers conference in early December to underline the point.

However, only Restaurant Brands has made even a modest effort to engage meaningfully on the issue. The other companies appear to be just stringing us along until the collective agreements expired on March 31.

Union members earning above the minimum wage are being told that they will not be getting a pay increase until we settle the agreement and the company don't intend to back pay them to April 1. They obviously hope that union members will quit the union in order to get the pay rise.

Maybe these companies are also hoping that they may be able to to use the new law that allows companies to walk away from bargaining in some circumstances.

The importance of getting rid of zero hour contracts was underscored by a proposal from McDonald's during bargaining that in return for a pathetic offer to give a small percentage of their staff some secure hours after two years service they wanted to right to take secure hours way again for “No-shows” that is the situation when staff don't turn up for a rostered shift. What that did is confirm that these companies view the roster as a tool to discipline and punish workers without a proper process.

We continue to hear horror stories of the roster being used to get rid of staff. Workers just get rostered down to such a low level they can't continue working and have to quit. We have had workers lose a regular shift if they call in sick one week. We have workers in some stores with open availability being roster 10 hours a week while others with the same availability are getting 60 hours. We have workers who complain about missing their breaks losing shifts the following week. We have managers favouring their mates and there seems to be no consequences for them when we challenge the favouritism. Managers seem to be a law unto themselves.

Lack of guaranteed hours also makes it very difficult to manage the interface with WINZ for those families eligible for Working For families or other forms of social support payments. 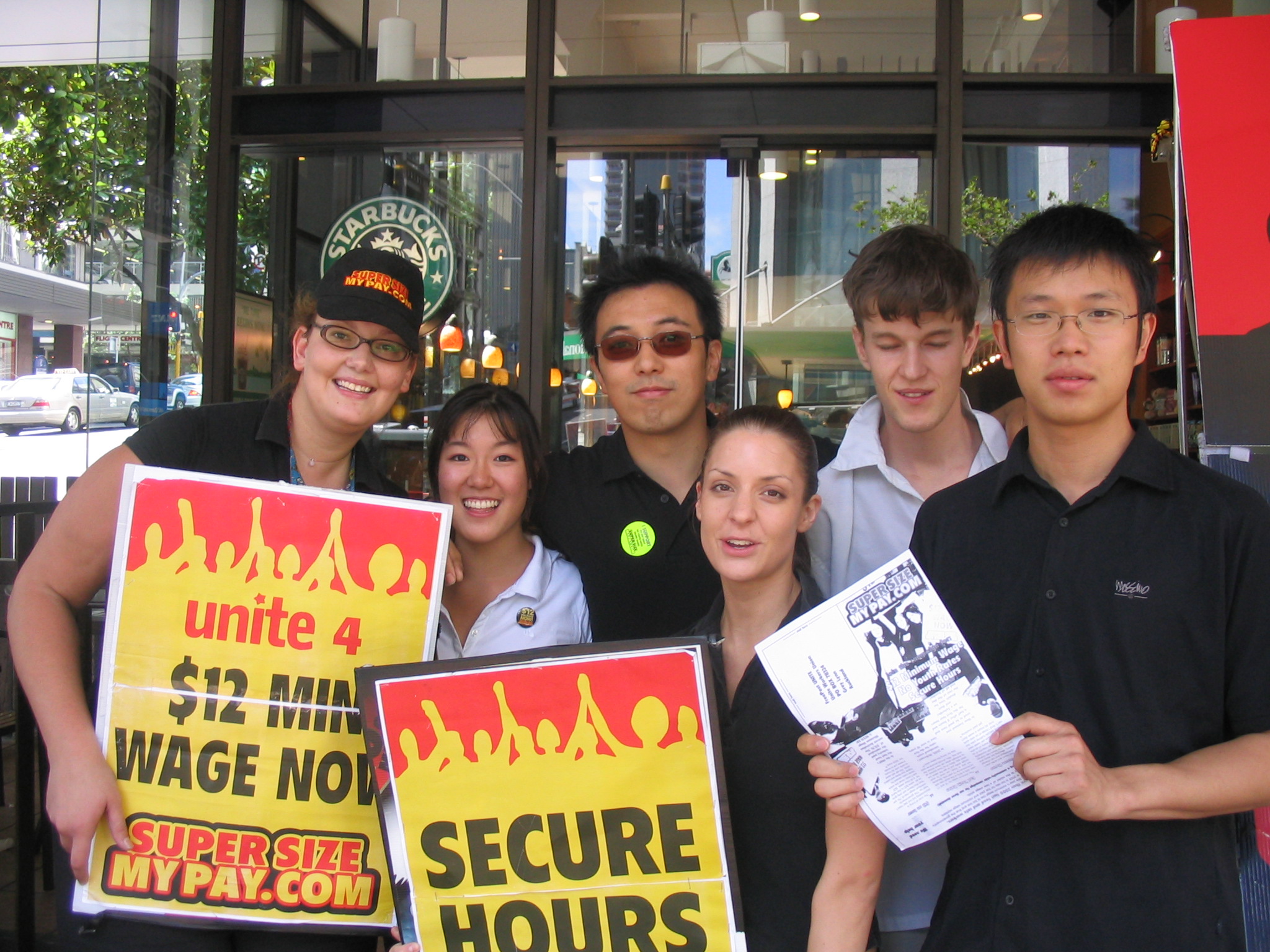 Non of the protections that we have had put in the collective agreements over the last decade to improve security of hours have proved effective. That is why we are determined that guaranteed hours are the only solution. We are willing to be flexible. We accept that the hours that can be guaranteed will have a relationship to availability. We accept that there will be peaks and troughs in business during a year. We accept that we can't necessarily have a gold plate agreement from day one. But we also know that all staff need some guaranteed hours and these must be able to be built up over time.

The other main claims in these negotiations have to do with the right of the union to simply be able to exist in these workplaces as a legitimate respected part of the life of a fast food company. These companies still seem to see the union as some alien presence.

We want workers to be able to choose to join the union freely when they are employed. We want to be able to visit sites and see all staff without managerial interference. We need to be able to go “back of house” for health and safety inspections. We need to be able to put up information on our own noticeboard without company interference. None of these things are guaranteed at most companies. Most of these are our legal rights. We have been flexible around timing of visits to avoid peak times, we have avoided going back of house in most circumstances, we have even given more notice to some companies than the law requires, yet the companies still routinely refuse to fulfil their side of the agreements which involve sending all staff out to see us when we visit in a timely manner. We are determined that these protocols around access and union rights are made more equal this year.

An important part of our claims in any negotiations is for the company to make a “pass on payment” to union members that matches their average fee of about $4 a week. We also ask the companies to pay this to members in such a way that the member can use that payment to fund the collective purchase of benefits that are delivered by the union. This means that we are in turn able to provide membership cards, discount booklets, life insurance, movie tickets and vouchers for major retailers. These are then delivered on a quarterly basis to members and it acts as a reminder to all staff that the union won the benefits that all staff enjoy. We have such a pass-on payment at Restaurants Brands as well as the major cinema and hotel chains covering about half of Unite's 7000 members.

A campaign of solidarity needed

To win the campaign to end zero hours in New Zealand once and for all will require a massive campaign involving industrial action by members as well as solidarity action by their supporters across the country. It helps that we are part of world-wide movement for social justice but we all have to step up to bring about meaningful change for tens of thousands of workers. Because they are very low paid we can't ask our members to take strike action for long periods of time. We try to take action for short periods during a peak business times and in the most public spots possible to gather broader support. The lack of guaranteed hours means that often workers have to face retaliation for taking action. Many workers in the industry are migrants on company specific visas and fear possible retaliation. But these companies also have an Achilles heel – their brand, which they value above all else.

We have made it clear to McDonald's, Burger King and Wendy's that their brands will forever be associated with exploiting young and vulnerable workers on zero hour contracts unless they move now to bring them to an end and sign new collective agreements with guaranteed hours and full union rights with Unite Union. We need your support to make that “warning” a reality.