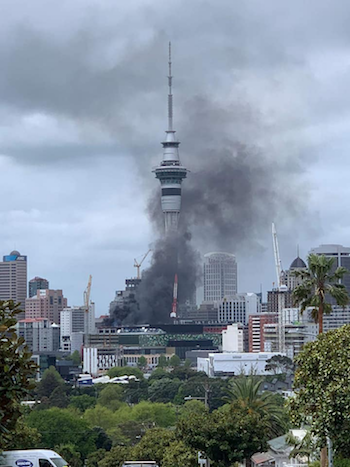 Unite union is making no apologies for demanding assurances and proof, in writing, that the SkyCity workplace is safe.  On Labour Day - a day when New Zealand is supposed to celebrate the rights that workers have fought for — union members at SkyCity are not going to be told to shut-up about their health and safety

SkyCity’s  priorities were very clear — getting the main gaming floor up and running and getting the cash back rolling in. The decision to re-open on Thursday appears to have been taken before the fire was even fully out.

There is a long history around the world of corporate decision-makers ignoring and downplaying health and safety concerns in the rush to keep business going, We only need to look at Pike River in New Zealand to see how corporates and government agencies can fail workers in the name of profits.  Unions need to be active and vigilant to protect workers health and that means asking questions and demanding answers — before it is too late.

SkyCity CEO Graeme Stephens seems to be willing to talk to media about his experience of the fire (complete with pensive photos of him “reflecting” on the fire). As he tries to gag workers who want to talk about their experiences of the fire and the aftermath perhaps he could at least answer some questions we have been trying to get answers to for quite a few days.

Here are ten to start with:

You told Stuff you didn’t wear a mask all Tuesday, despite breathing smoke for much of the day.

1. Do you now accept you should have worn a mask on Tuesday if you were not going to remove yourself from the smoke?

2. If you should have been wearing a mask, then should not all SkyCity employees and customers who were not immediately evacuated been issued masks when smoke started filling the workplace?

3. Did you not wear a mask because you wanted to downplay the risks to staff and customers who could smell and see smoke, especially those that were not evacuated until nearly 6pm? Or was it because, if you wore a mask, employees would ask why they didn’t have masks (including security staff outside in the worst of it) and you knew that SkyCity did not have anywhere near enough masks for all employees still on site?

4. Where are the written reports we have asked for?

5. What has been done to make sure the Air Conditioning systems are clean and functioning, rather than recirculating trapped smoke particles?

(The advice from K2 Environmental Consultants  specifically about the Convention Centre smoke was “leave the building until all traces of the smoke have gone.  This may take days as air conditioning systems can be overloaded with toxins and will require a complete service.  The air conditioning systems will spread the toxins throughout the building.”}

6. What was actually in the smoke and in the residue that staff and customers can still smell?  We have had no response to our questions apart form verbal assurances it is “safe”.  If you don’t actually know then how can you give assurances that it is safe to clean up and work in?

The list of likely toxins in the smoke and residue (according to K2 Consultants) is disturbing:

7. Will you, as CEO, commit to a full and thorough review of the evacuation on Tuesday to get answers to the many questions that have been raised, including

8. Why are the corporate offices closed until Tuesday this week but casino workers called back in on Thursday when the fire was, literally, still burning?

9. Why were workers told that the casino would be closed Thursday but then instructed to start work that day?

10. What reports confirming the safety or otherwise of the workplace were available before that decision was taken?