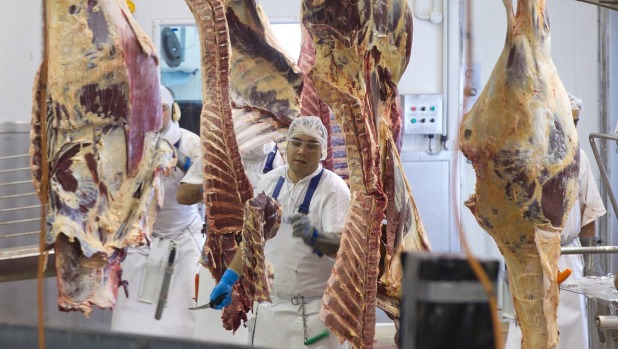 An Employment Court decision has forced AFFCO back to mediation with the Meat Workers Union.

By Megan Hunt (Reprinted from Stuff)

A decision released by the Employment Court today said the Meat Workers Union and AFFCO reached a stalemate in negotiations for a new collective contract which expired at the end of 2014.

When workers returned for the 2015-2016 season the conditions AFFCO wanted to add to the collective contract - opposed by the union - were added to individual contracts workers needed to sign to regain employment.

"Once AFFCO had sufficient employees on its desired terms and conditions of employment recorded in individual agreements, there was no point in it continuing with collective bargaining," the court decision said.

The individual contracts applied to staff at sites around New Zealand including Te Puke, Feilding, Whanganui, Horotiu in the Waikato and Moerewa in Northland, with the majority of seasonal workers signing contracts so they could return to work.

However a group of 250 workers in Wairoa refused.

This group has reduced to 150 workers and on Wednesday remained locked out by AFFCO, nearly eight weeks after the site opened for the season.

Wednesday's decision deemed this lock out "unlawful" and said the company failed to carry out collective bargaining in good faith and ordered further mediation.

AFFCO had applied separately to the Employment Court to walk away from collective bargaining but this hearing, scheduled to begin on November 23, was postponed following Wednesday's decision.

New provisions in the individual contracts included an end to the longstanding concept of "seniority."

As site shut down for the season around April staff were laid-off according to seniority but the new contracts allowed the company's management to lay-off staff at their own discretion.

Lay-offs did not have to be discussed with the employee and they were given five calender days' notice.

While working the contracts allowed AFFCO to reduce or increase an employee's hours of work at will, with any changes posted on a staff notice board.

The minimum weekly pay was abolished, staff were required to work when instructed, and meal breaks were only to be taken "as and when the demands of business" allowed.

These new contracts superseded all previous contracts, which preserved components benefiting AFFCO and put an end to any terms and conditions benefiting employees.