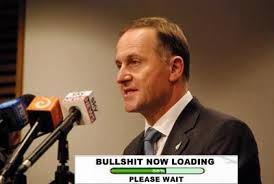 In a recent Radio New Zealand interview, Prime Minister John Key shamed low waged workers calling them, “drug addicts” and inferring they are “lazy.” Okay, I am one of the hundreds of thousands of low waged workers in this country and I feel devastated by his comments which also included stating we, the lazy and low waged workers, have no work ethic. Key is using these reasons to justify bringing in record numbers of migrant workers into New Zealand, to take up roles in work considered unskilled like fruit picking, hairdressing, labouring, baking, driving trucks, managing cafes and working in hospitality. As Key, told Radio New Zealand reporter Jesse Mulligan, “they [New Zealand’s unemployed] just can't muster what is required to actually work."

I want to be very clear here, I support immigrant workers. I embrace the diversity they bring to Aotearoa and I stand in firm solidarity with migrants for many reasons. The most important being that nearly always the immigrant workforce are subject to low wages and exploitation[C1] . Something, I have acute experience in. However, what I do not embrace is Key, calling workers like me "lazy" and "drug addicts" while using migrant workers to flood the job market and exploiting them as cheap labour to depress wage growth and help his mates get richer.  Oh and overwhelmingly it is indigenous people, people of colour and women who are subject to fluctuating hours and awful pay. So cheers John Key for the casual/coded racism and sexism. I’d call him a cunt but he does not have the warmth nor the depth.

Most low waged workers who I know are some of the hardest working people you will ever meet. We undertake multiple jobs, which is hard I promise you, and we have no choice other than to do this. There has been a major rise in the casualised and part-time economy, and full-time work is almost impossible to come by. We are left stitching different jobs together to make up full-time work. We give-up our nights, days and weekends to pour your pints, flip your burgers, serve food we can’t afford, and clean your damn toilets. Yeah. You know all those jobs people don’t want to do? We do them. We work twice as hard as CEOs and workers considered as ‘highly skilled’, for measly paychecks in high-stress environments and we endure the poverty shaming which comes with underappreciated low waged work. Being poor is to incur ridicule and constant put-downs from strangers, people we know, the mainstream media and our political leaders.

Low waged workers have little to no bargaining power over wages thanks to decades of consecutive governments actively seeking to undermine and weaken Unions. Such as the Employment Law Contract which was passed in 1991 which made it much harder for Unions to operate.

“Increasingly, insecure work arrangements are being applied in businesses where there is continuous work, and the only reasons for these arrangements are unreasonable cost-cutting and the desire to place the worker at a disadvantage.” 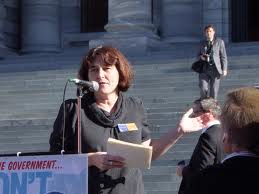 So many of our most vulnerable and precarious workers have no protections no benefits and nowhere, to turn.  If we don’t work our fingers to the bone for ruthless employers, we get fired or our shifts get cut. This leaves us scrambling to find other work in a stagnant and flooded job market. Which means we become desperate and are easier to coerce into taking pay below minimum wage and have to accept workplace injustices like harassment and assault.

I have PTSD from the number of times I have had guys attempt to assault and feel me up on shift when I have been working in nightclubs and late night bars. I have almost no direct course of action I can take over this as the hospitality sector is unregulated and has no real union representation. Collective agreements are unheard of within the hospitality sector. So, if I seem “lazy” or wasted on shift it is likely because I am feeling depressed and anxious in response to a demeaning and sometimes dangerous work environment.

It is important to note that, while Key calls low waged workers “drug addicts” and “drug-addled” in his RNZ interview, he fails to mention that drug addiction is a symptom of poverty, and low wages combined with insecure work, induces poverty.  Wanting to check out of this grinding reality is a perfectly normal albeit, harmful response to an, absolute feeling of hopelessness and despair. Comments like Key’s which shame an entire class of people, make me want to pick up a bottle of booze and down every last drop, until I can feel nothing but numbness wash over me.

Honestly, this type of shaming of low waged workers like myself makes me cry. I’m serious. It hurts. It hurts because no matter how hard I try, I can’t seem to secure even low paid and unskilled work for long periods of time. I am not alone in this struggle. It was Key’s government which introduced the 90 Day Trial law in 2011, which only serves to compound the rising issues associated with precarious and low waged work. This law is often wielded illegally particularly in the hospitality industry, by employers and is used with impunity. In my experience, an employer will use this law to fire you on-the-spot with no notice and no reason given which breaches the law.

I spoke to Alan* a 28-years-old who in the last two years has cycled in and out of seven different jobs ranging from call centre work to filling out online surveys, with increasing precarity reflecting the rise of casual and insecure work over the last two decades. Throughout this time Michael has been subject to 90-Day Trial periods three times. Michael told me about the impacts that ongoing dismissals has had on his mental health,

“It has made me feel anxious. I have a diagnosed anxiety disorder now, and the professional opinion was this disorder stems from my job insecurity.” An unhealthy workplace is not a productive one.

There are real costs to mental well-being when the only type of work you can find is insecure, and you never know if you have a job one week til the next.

Five weeks ago, I was personally subject to the 90 Day Trial five days out from when it was due to end. The reason? I was told that I did not “perform my duties as a receptionist up to standard”. I had worked incredibly hard for this company and went above and beyond my job description. I’d lost considerable amounts of weight during my time in this role as I spent so much time running between the multiple levels of the building too clean, run coffee and tea, and undertake errands for other employees.  Mostly, I felt stressed and overworked during and after work hours. Still, I was told, my hard work was not good enough. When is our hard work ever fucking good enough? 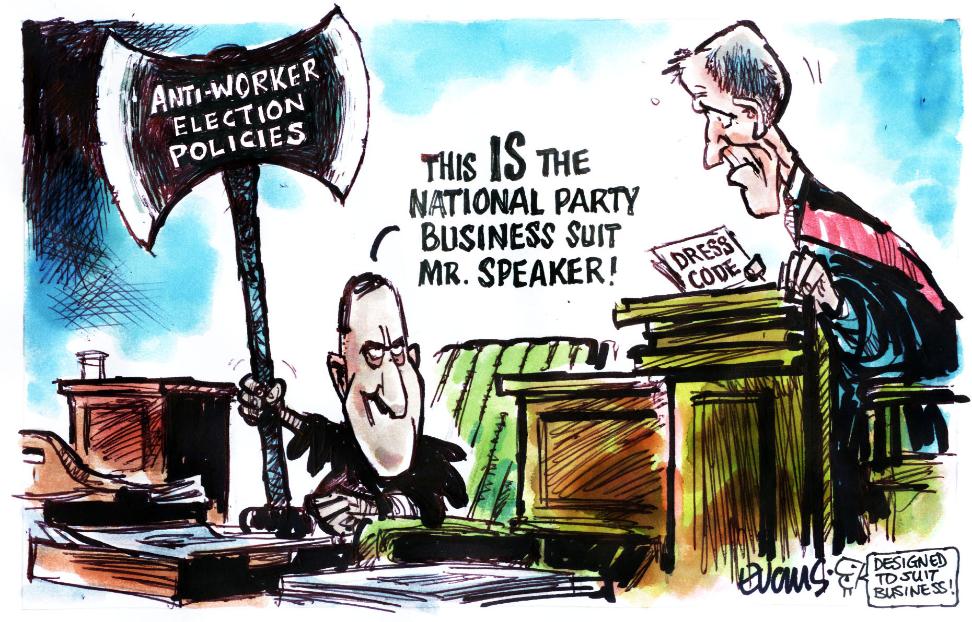 Being fired under this law was a major blow to my confidence and since I have struggled to get out of bed. I cannot keep bouncing from one job to the next with no chance of economic stability or snagging upward mobility. My experience of insecurity has been ongoing for years and years, and I have little hope that my situation will ever change. Young people who are born poor or fall into poverty and downward mobility are denied a future or, at least, any economic and personal well-being. This is not the kind of future our young, or anyone, deserves or should just accept as a given.

John Key has the audacity to call those living in poverty because of low wages, bad luck and unemployment, “lazy” and “drug addicts”. His rotten rhetoric blames us solely for our circumstances when it is his government that further entrenches poverty into the lives of blue-collar workers and the working class.  It was National MP Paula Bennett who enacted sweeping welfare reforms and sanctions which made getting a benefit a humiliating experience, not to mention the measly state payout barely covers rent let alone rising living costs.

When you rip gaping holes in social security nets those with lesser means are left to drown under the rising tide of inequality and structural unemployment and underemployment. No matter how hard you try to swim to the surface the waves keep crashing down, pushing you further and further below the surface. So many of us who are bodily abled or not, mentally well or not, are left with no choice than to take any work no matter how dangerous, precarious and sub-human the wages. What sort of a choice is that?

Under low wage neoliberal governments like National, and previously Labour, there is almost no hope of ever improving our situations and, when hope dies everything dies. I’m not asking for much just wages which meet inflation and living costs, and an employer who cares enough to guarantee set hours each week. A living wage is not a big ask. 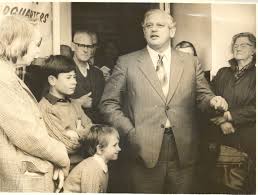 In the words of Norman Kirk, who might just be the last Labour leader to actually give a shit about workers’ rights (and he led back in the early 70’s):

I want to tell you everything will be ok and that it gets better but I would be lying to you. I can’t sell you a fairy tale happy ending because there are no happy endings for the growing numbers of poor, disenfranchised and marginalised. It is only going to get much worse, before it gets any better. But what people who are poor and struggling need to know is our circumstance is not your fault. You are not lazy. It is not a personal failing if you turn to addiction to numb depression, anxiety and hopelessness in response to a world gone mad. Poor life choices have little if anything to do with the hundreds of thousands of people living in poverty in this country. You need to know there is no shame in being poor. The only shame is in the laziness, incompetence and widespread sociopathy of both right and nominally left-wing governments who have failed, dismally, to protect those of us who were not born into wealth and privilege.

*some names have been changed to protect their identity

Kia ora all! I am freelancing which means I have no secure income so I rely on donations from the wider public to keep myself economically afloat. If you like what I have to say and want to support me, you can make a direct contribution via my bank account:

Thanks so much for your aroha and time