‘We Triggered Something Epic’: An Interview with Naquasia LeGrand of the Fight for $15

‘We Triggered Something Epic’: An Interview with Naquasia LeGrand of the Fight for $15 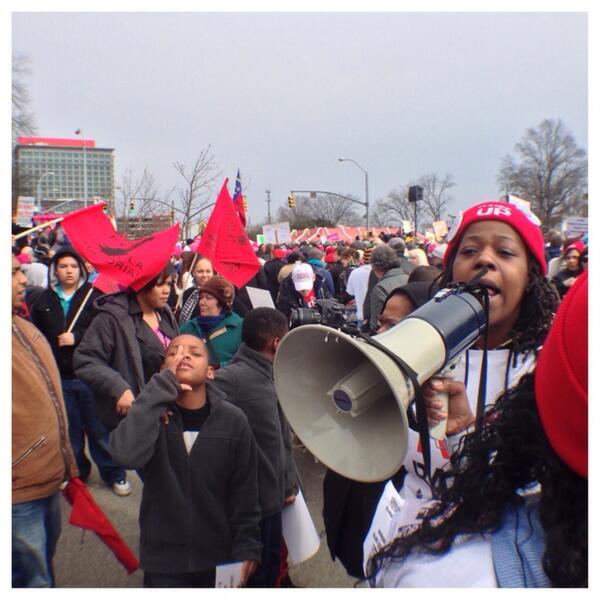 When Naquasia LeGrand first got involved with the Fight for $15 workers’ movement, it was, she says, “underground.” No one, least of all her, knew how far the movement would spread in the four years since she helped launch the first fast-food workers’ strike, in New York City in November 2012. New York fast-food workers won their raise in 2015, though it won’t be fully phased in in the city until 2018.

Cities and states around the country have acted to raise wages since the movement began, and the battle has spilled over into the presidential election. Fast-food workers, including LeGrand, are demanding that the candidates endorse the $15 an hour wage. LeGrand is now in North Carolina and continues to organize her fellow workers in one of the least union-friendly states in the country, having become a national leader in the movement. We spoke about what’s changed—and what still needs changing—since the beginning of the Fight for $15.

Q: I first met you at an early action back in 2012, and someone told me that was your first interview. Now I see videos of you all over social media, winning arguments with TV pundits about economics. Tell me how this fight has changed your life.

Naquasia LeGrand: It’s changed me in so many ways. I’m a different person than I was almost five years ago, with the knowledge of what type of power workers really have. We tend to think that we’re supposed to be used to these things [low wages, unreliable schedules, no respect]. We’re supposed to settle for these things. At the end of the day, jobs like these are growing rapidly. These are what they’re calling good jobs.

I never knew that I could inspire other people to want to stand up and have a voice of their own, too. That’s basically what I’ve been trying to do with this movement, just get people to fight for what’s right. 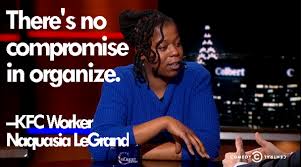 Q: Tell me how you first got involved in the campaign and what you thought would happen.

LeGrand: I got involved when they first started, underground. There were organizers coming around to people’s stores, talking to workers and it just sounded like such a great idea. I felt like this was an opportunity to gain some extra money, living in New York City because at the time, 2012, I was only making $7.25 an hour. I was living in a two-bedroom apartment that cost almost $1,300 a month, and sleeping in there with five other people.

Q: Was there a particular win, or even a setback, that stands out for you?

LeGrand: Before the first strike, I had my whole store involved and then everybody backed out, because the manager found out what was going on. The night before, the manager had made a round of calls and cornered people, so the day of the strike, all my workers backed out. But with that being said, I kept on fighting and my workers eventually came back out.

Q: Was it hard, when New York City was the first place to go out on strike, to see Seattle raise the wage to $15 an hour first?

But hey, if we could get some help from our governor or our senators, why not? All the help that we can get to fight these corporations is always great, so that’s the reason why we are where we are right now. We triggered something epic that had never been done—we had workers all around the nation doing this and making it happen.

Once I saw Seattle raise the minimum wage it was like, “Oh, this actually worked.” That made us work harder because it shows that anything is possible when workers show up and have a voice.

Q: Have you gotten involved in other organizing work because of the Fight for $15?

LeGrand: I have been to other different events, like Black Lives Matter. They had something in North Carolina for the farmworkers. I couldn’t make it to that event, but we did a group picture to show that we as fast-food workers stand with the farmworkers. I will do any other event, besides the Fight for $15, because at the end of the day we have to support other movements, for racial justice, immigration, education, all that falls into the cycle of what we’re trying to change in America.

Q: What does it mean for presidential candidates to join the Fight for $15 protests?

LeGrand: Let’s just say these candidates, they have a way of using their words to get what they want. We as fast-food workers reverse it on them. We want to use our voice to get what we want, too. You’re not going to get our votes just because we see you out here on the line with us. You actually have to state that you’re for $15 and a union. That’s why we don’t want to endorse anybody, we want all candidates to fight for our vote, to come get our vote.

Q: If you win the union and $15 an hour, what then? What are some other changes you’d like to see?

LeGrand: There’s never an end in sight. It goes on forever because these corporations tend to try to find ways to get workers out of jobs or try to cheat them out of their money. And nobody wants to stay at $15 forever, so we’re going to make sure workers are getting a raise. We want to make sure people get paid vacation, paid sick days. This is a fight that’s always going to be going on because workers always have to stand up and fight back.

Q: Anything else you want people to know?

LeGrand: Don’t be afraid to come out and have your voices heard. We work so hard, just to live, yet we can’t even live because we’re struggling so much. It’s not just fast-food workers who are out here on these lines. We have all different types of workers, from airport workers to adjunct professors who have PhDs.

This movement is bigger than $15 and a union. This movement shows that no matter what’s going on in America, no matter what it is that we’re fighting for, if you want change for your city, for your community, for your country, we as a people can’t be silent anymore. We have to speak up. We have to point out the problems and the issues so we can make our community a better place for all workers and all human beings.

Sarah Jaffe is an independent journalist covering labor, economic justice, and social movements. She is the author of  Necessary Trouble: Americans in Revolt, to be published by Nation Books in August.